Alleys of the East

‘Alleys of the East’ is a collection of images of alleys or entries in the east of Belfast by Jonathan Brennan. Is it also a video and a ‘zine.

I think when you move to a new place, there’s a learning curve in terms of fitting in and adapting, however, on the other hand, you pick up on things that perhaps people who have lived here for longer have grown used to or take for granted.

When I moved to Belfast, it wasn’t long before I was exploring the Comber Greenway which passes very close to where I live. I also started to wonder about these alley spaces behind the rows of terraced houses so common here. Then I made, what seems now, a rather obvious conclusion: that behind every row of terraced houses there is an alley waiting to be explored, and I started to explore them all. Around the same time I began walking each evening to get fit, and after so many walks around East Belfast I began to vary my routes by using the entries. It was then that I started to discover things and really got hooked.

What I find fascinating is the range of alleys you find, the ways in which they are used and the stories they tell. Some are purely functional, just wide enough to wheel a bin down; others are totally overgrown or have become unofficial dumping grounds; others still feature little ‘alley gardens’ with statuettes of gnomes and owls, strawberry plants, herbs and carefully tended flowerbeds; bird feeders which are regularly stocked; a fold-out barbecue attached to a wall, items repurposed and repaired.

I carried a camera with me at all times and took black and white photographs of these places. I thought they might make an engaging book if coupled with interviews with characters I met on my alley walks, however, apart from a man who told me about his (now sold and levelled) steelworks just behind the restaurant fronts of Ballyhackamore, I never met anyone to interview. I was going to have to try harder.

In the end, the photographs became the inspiration for the works in the current exhibition which use my take on the technique of monotype – basically I cover a plate of gelatine with black acrylic paint, then wipe away the bits that I want to be white with Q-tips, baby wipes, the wrong (and the right) end of a paintbrush, rags, etc. Then I press a clean page of Zerkall paper onto the wet paint and peel away an image. The ‘mono’ in ‘monotype’ means you only get one finished artwork – so it’s like a cross between a painting and a print.

I had noted the locations of the gardens and places where people had decided to take ownership of their alley. I dropped notes in people’s doors explaining what I was up to and asking if they would be happy to do an interview with me. Surprisingly, I had lots of replies! The interviews and footage have become ‘Alleys of the East’ the video. 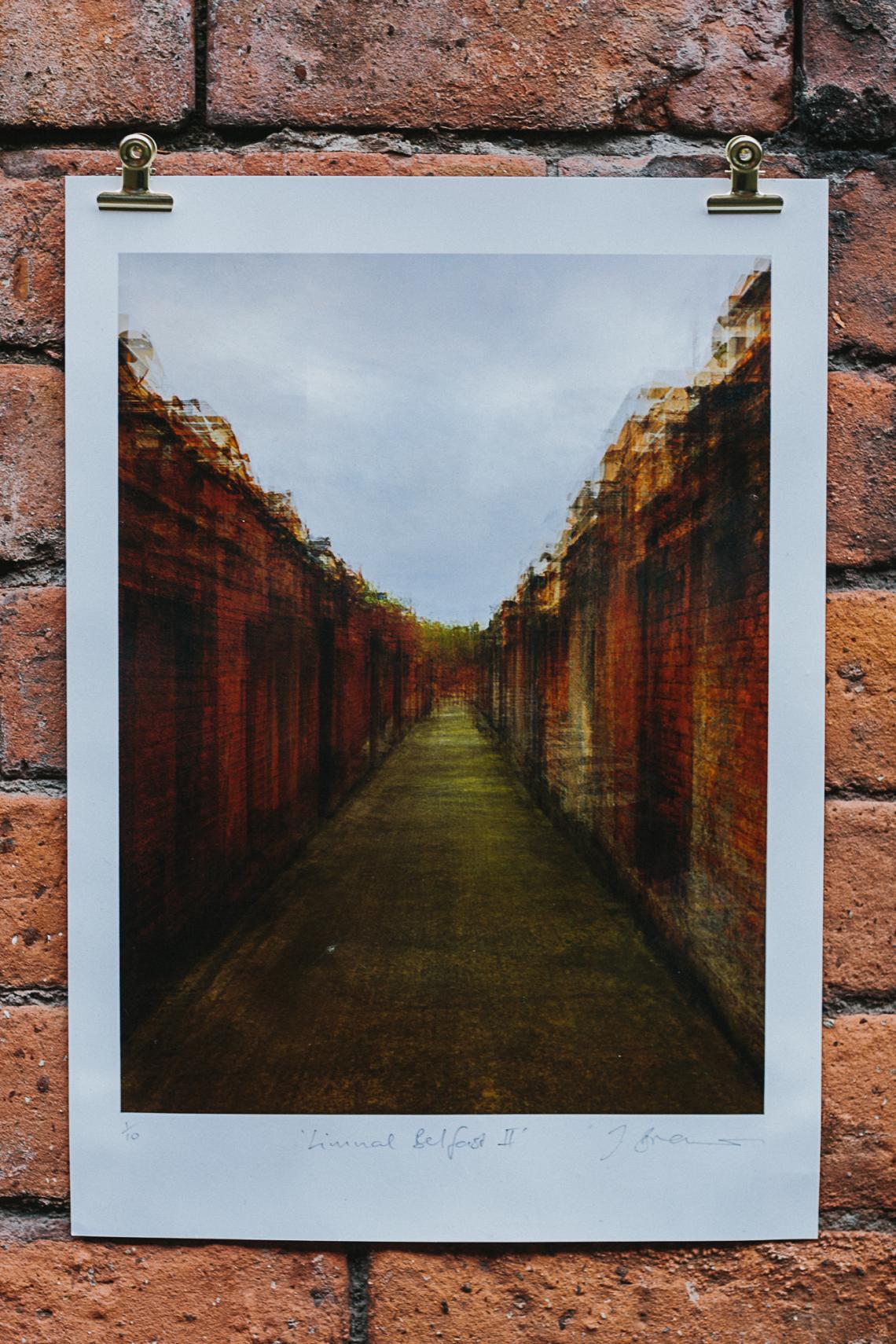 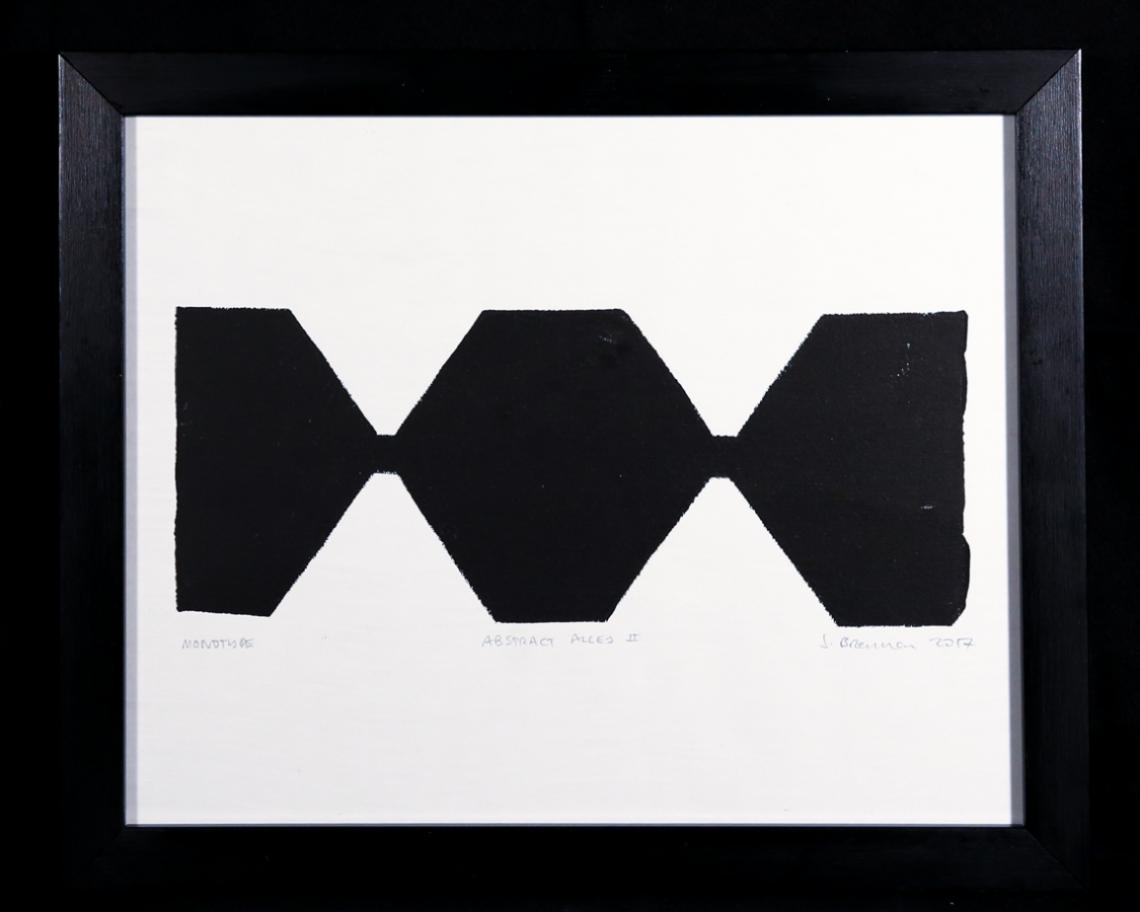 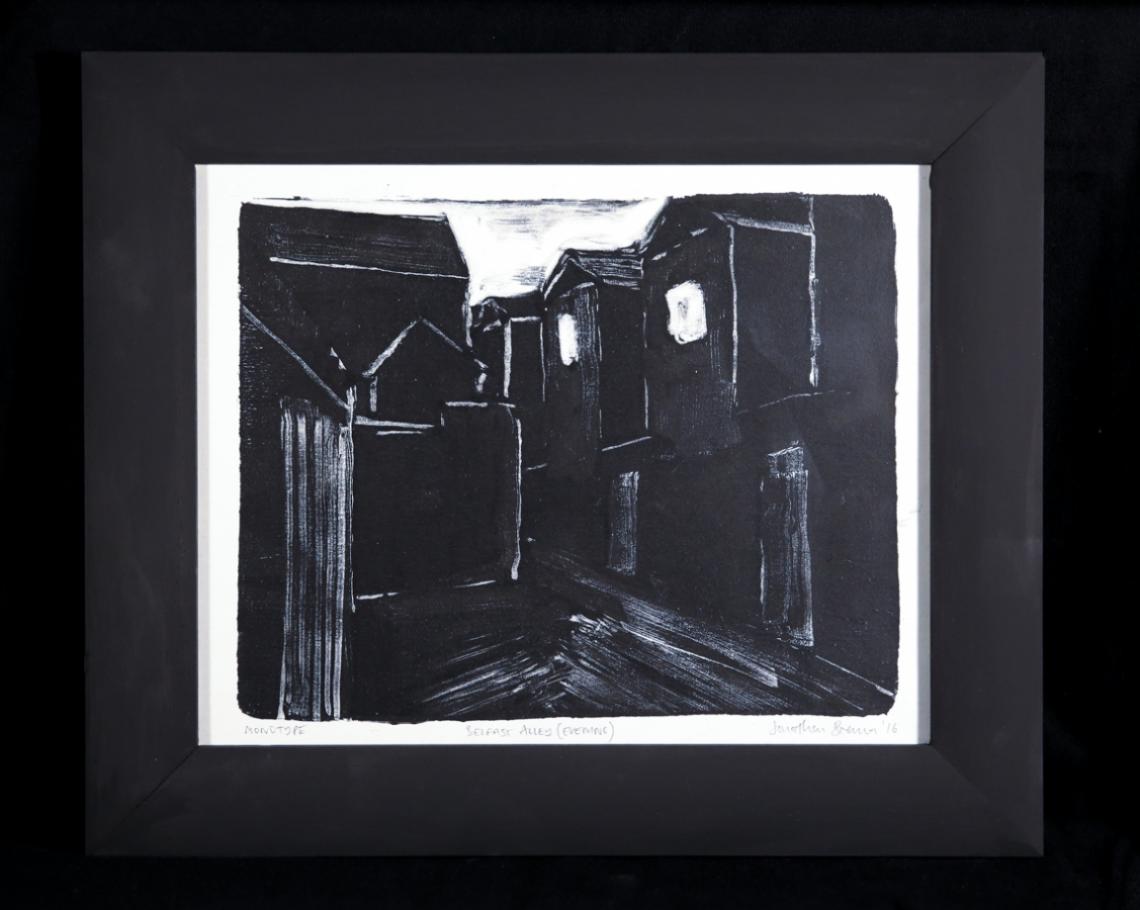 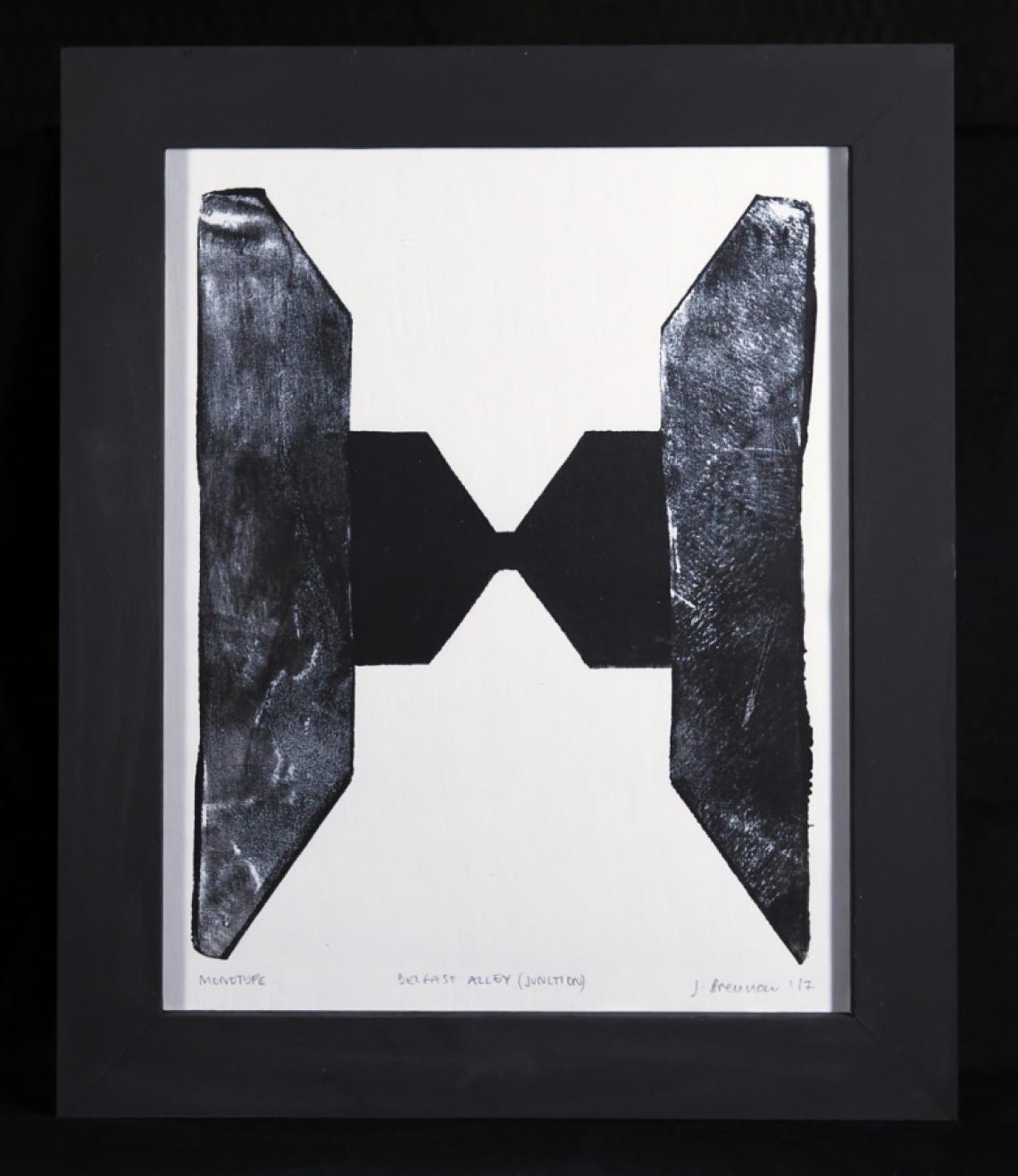 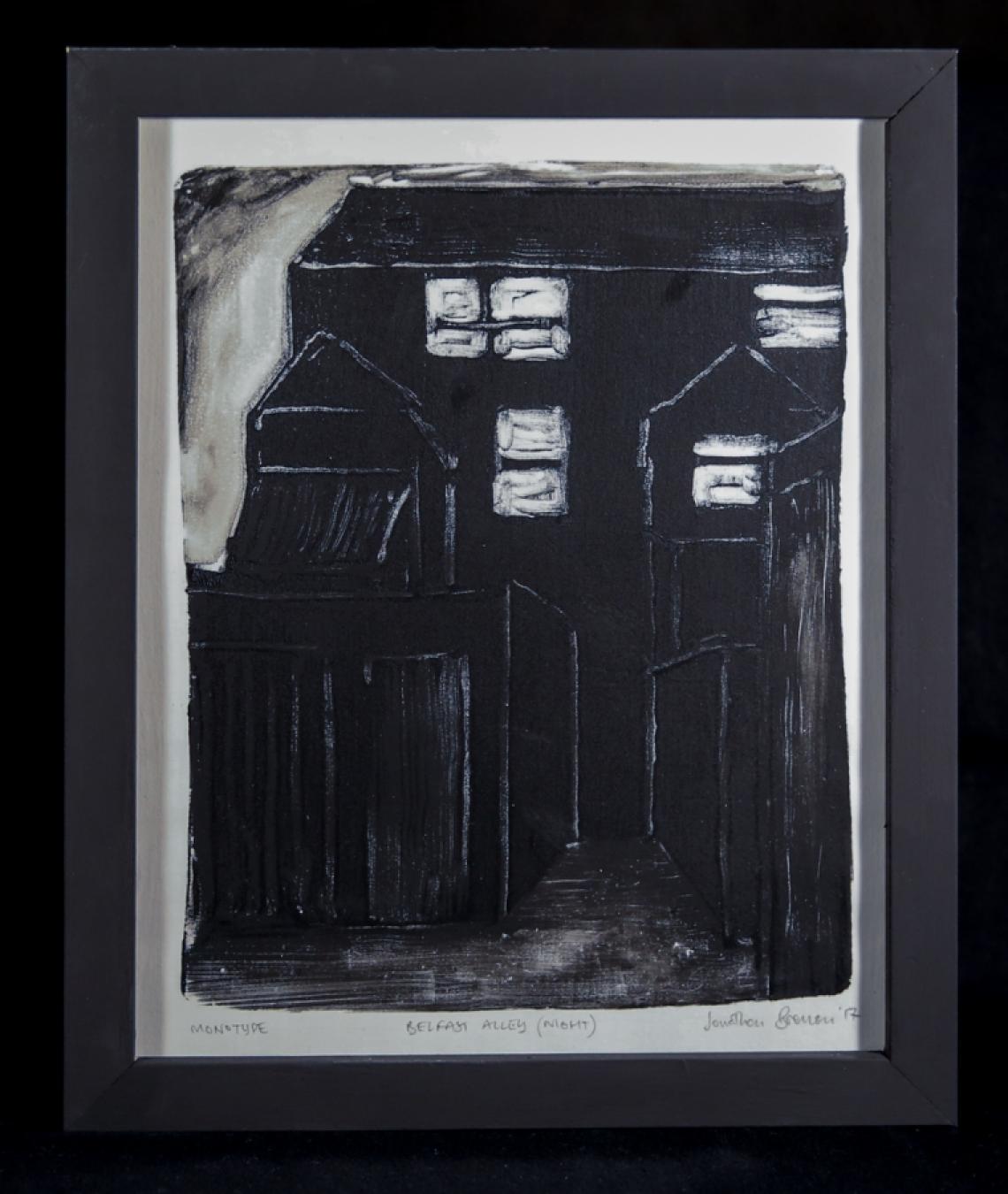 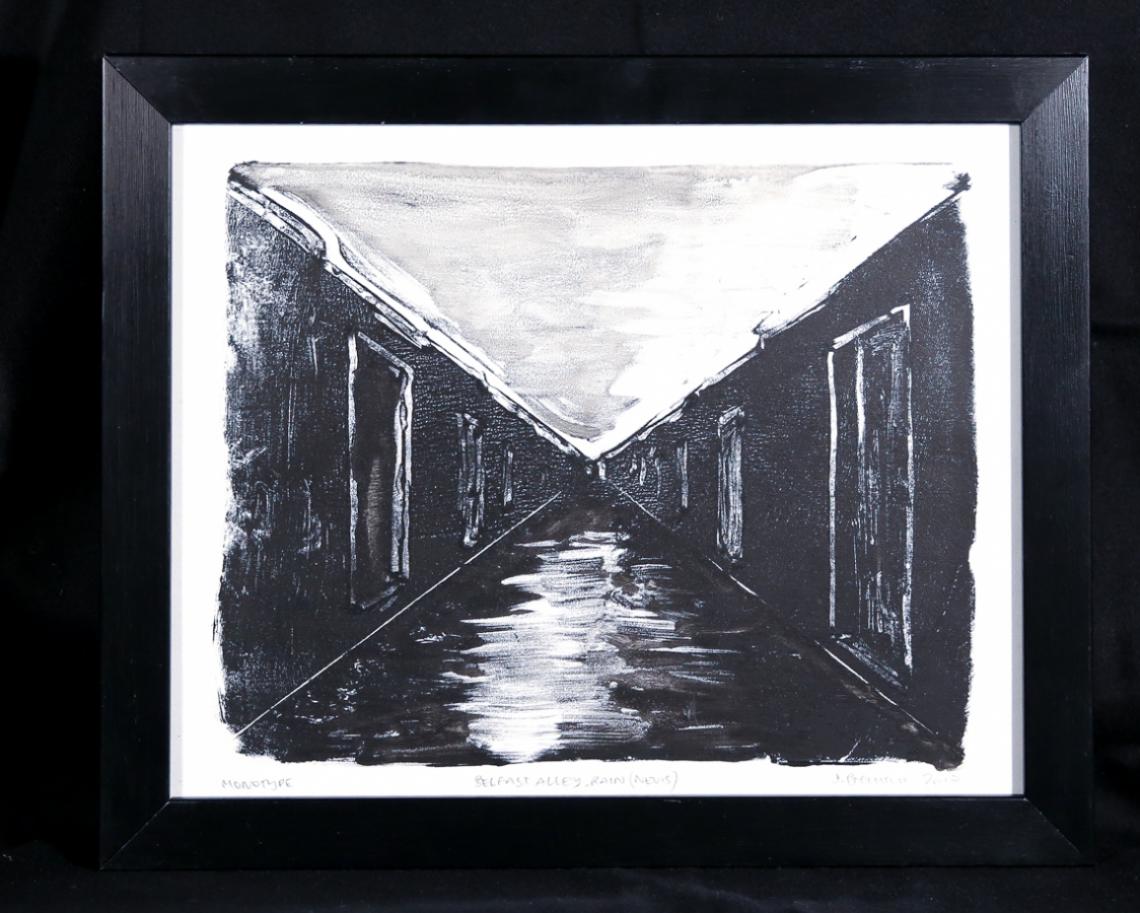 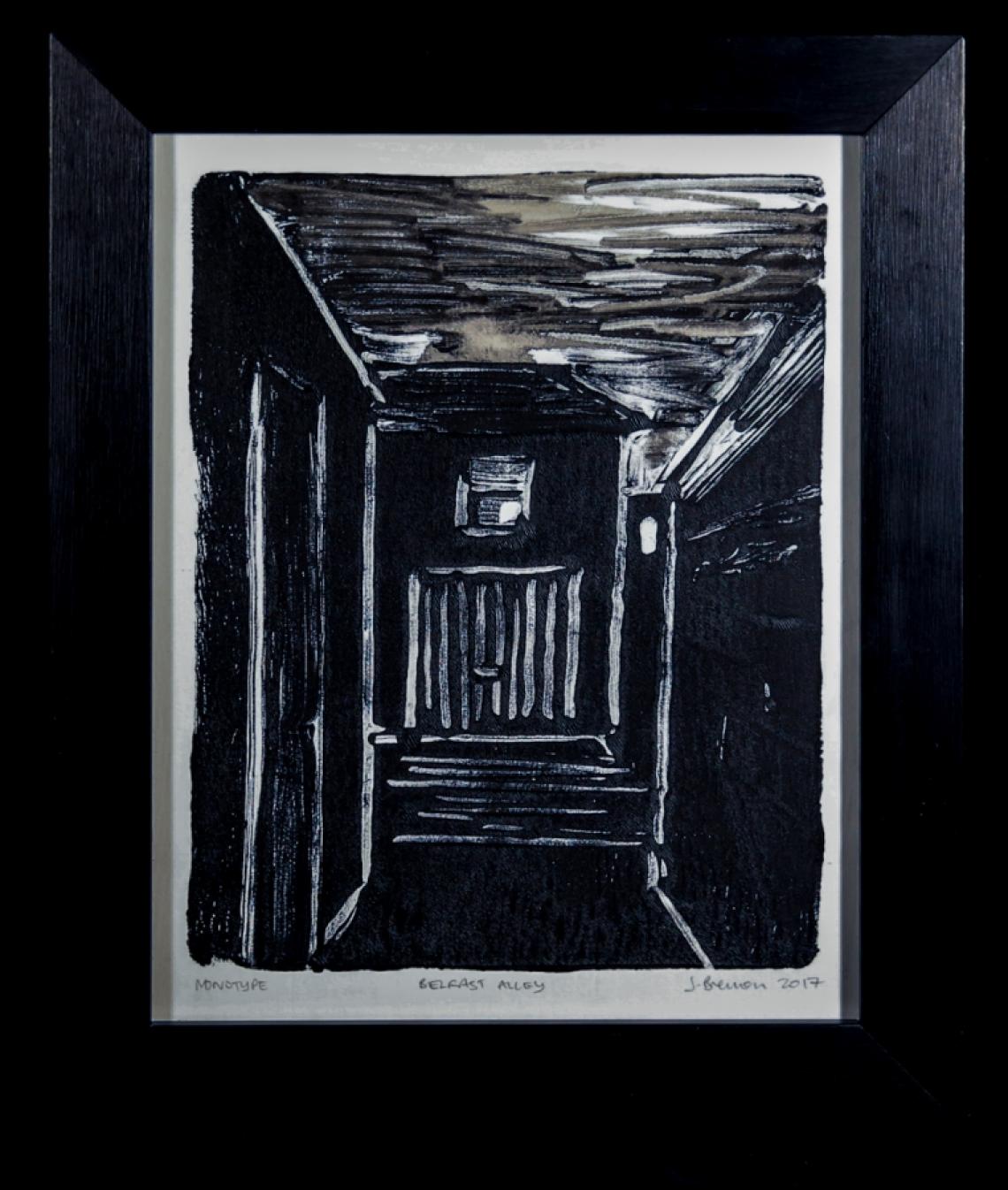 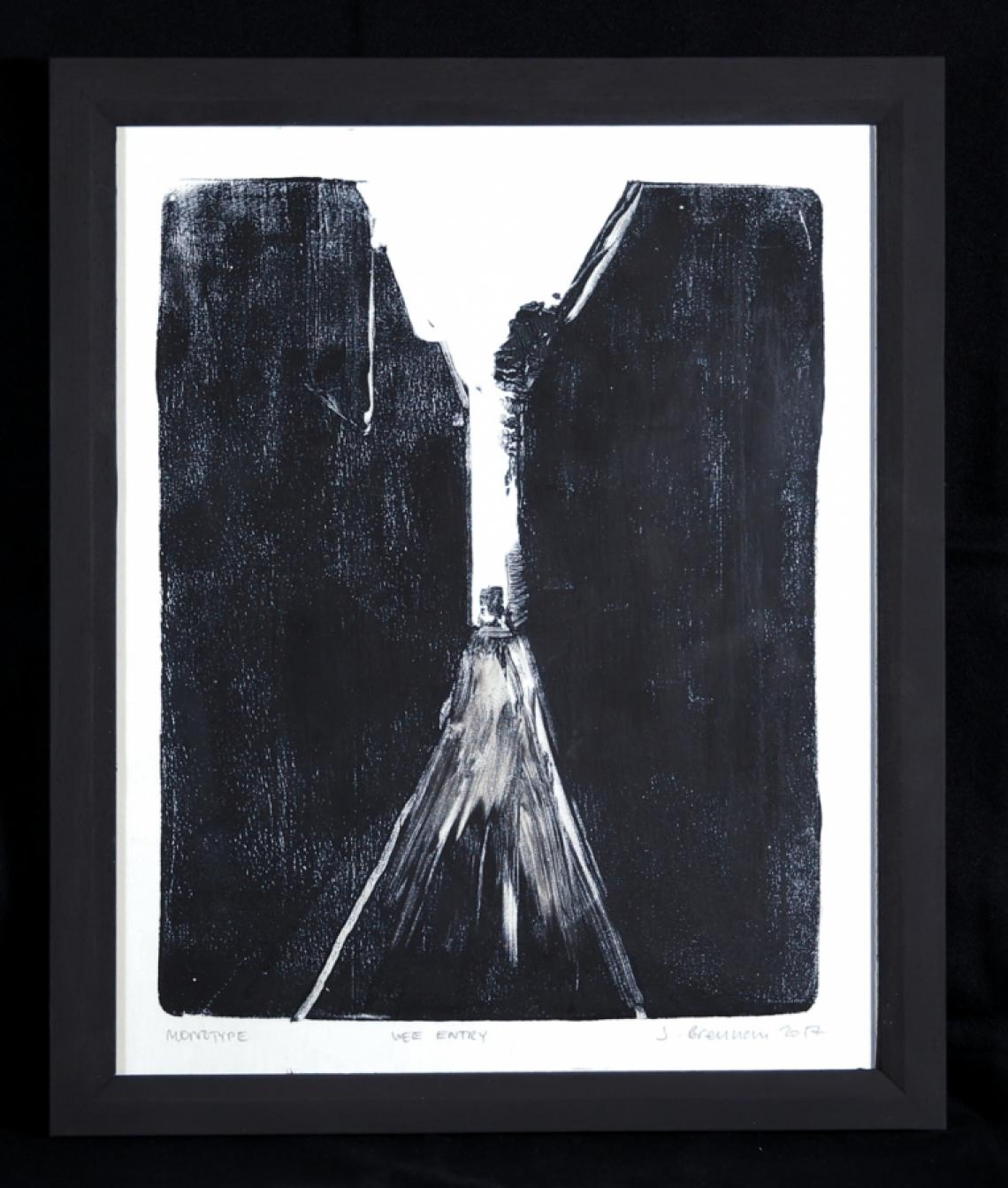 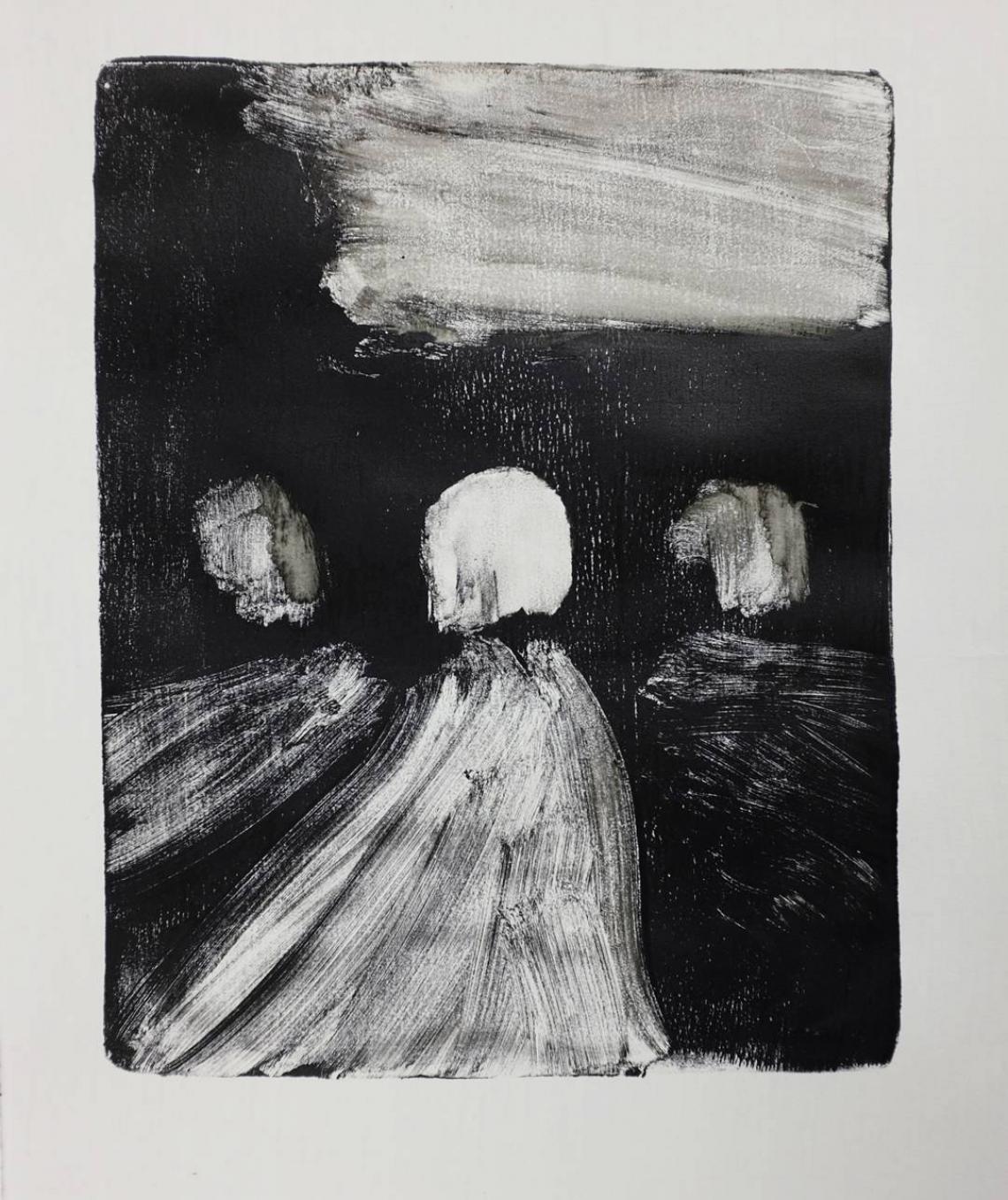 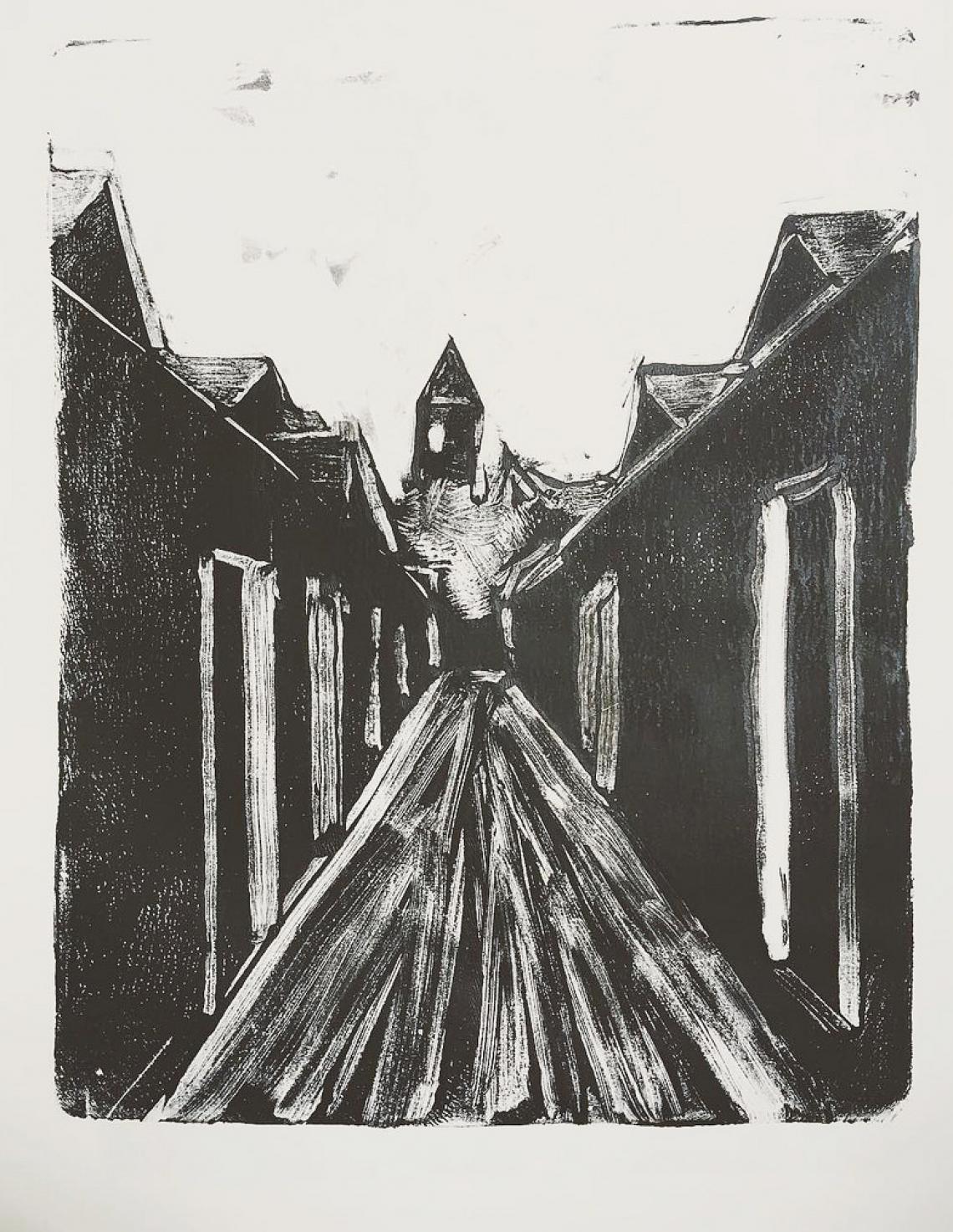 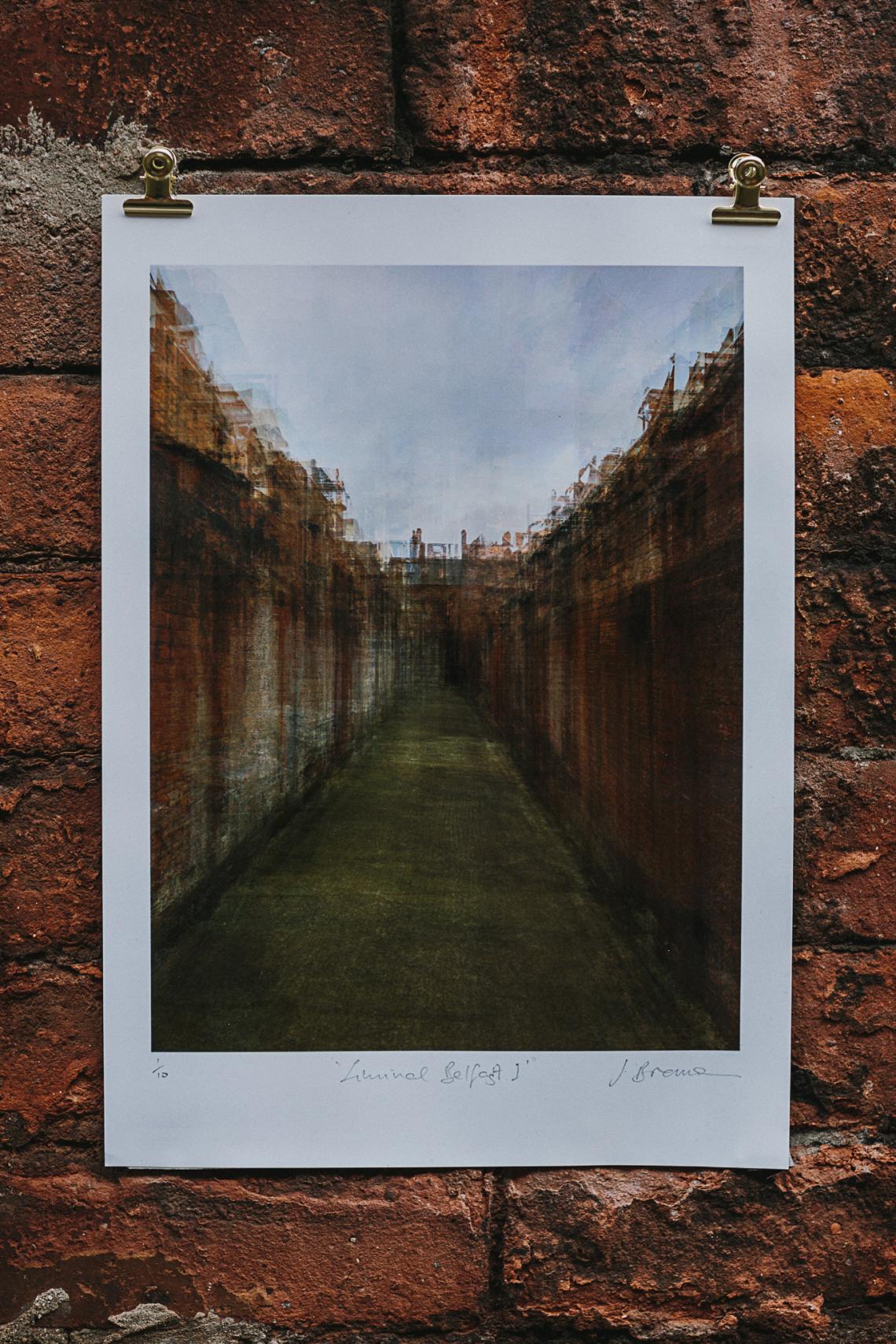